It’s that time of the week again and we are back with a fresh new video starring yet another hot hitchhiker we met while cruising Czech roads. 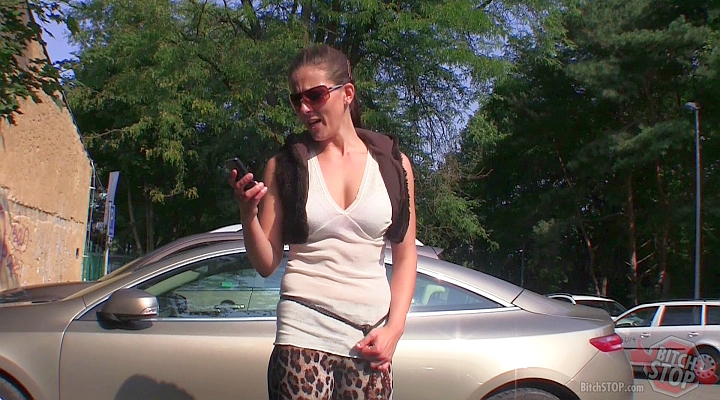 This girl is awesome and I think you’ll like her a lot.

So what’s her story? How did we manage to score this pretty girl? Well it’s starting just the same way you are used to by now. I rode from a meeting with my friend and as always had my camera ready for action. We both scoured every road, but couldn’t find anything. Just when we already almost gave up, friend noticed this pretty girl standing and apparently impatiently waiting for something. So I pulled over and friend asked what the matter is. She said she’s waiting for her stupid boyfriend who was supposed to pick her up an hour ago and is still not there, not even picking her phone. Naturally we offered her ride and she happily agreed, saying she’s just supposed to pick something up. Couple troubles are amazing – they tend to work like a powerful aphrodisiac for young ladies and it did wonders with this one too. She kept talking too fast, clearly pissed at her bad BF – she said he gives her such a hard time most of the time, we wouldn’t believe. Friend took advantage of it and asked her for a walk, that she could clear her head and tell him all. Clever guy, right? It was clear she just wants to pay back her SoB boyfriend so she agreed. No need to bother you with details of her guy – all we are interested in is seeing this chick naked and so was my friend. Soon after he already plugged her mouth with his cock, which served two amazing purposes – to shut that bitch up, stop her constant complaining and to have some naughty fun. Check this chick out and watch what an angry girlfriend can do to a complete stranger, when she gets the chance! It’s awesome...