Right from the start I’ll give you a warning you should heed no matter what. 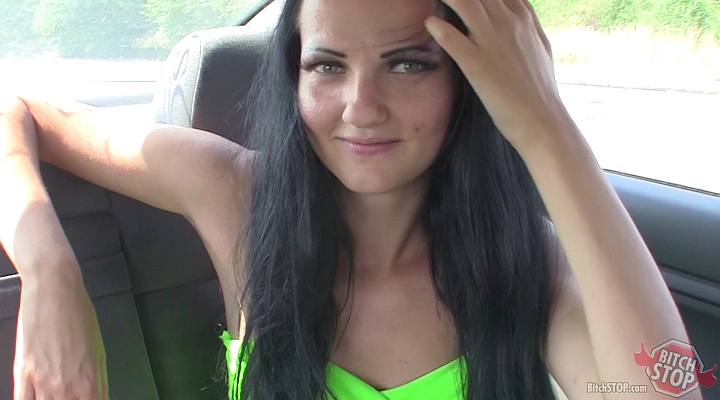 If you’re a forgetful guy whose girlfriend is a frisky little thing with amazing legs that open for anyone almost effortlessly, you better never let her out of your sight.

I know it seems understandable to you now, but just wait while I tell you what happened to us – then you may keep a better watch over your significant other. I rode with my friend and we decided to stop by at a gas station to buy cigars and other stuff. We noticed a smoking hot girl with wonderful tan and a body that would make any man cry just standing at the entrance of automatic car cleaner. We talked and she said she’s waiting for her boyfriend who’s having his car cleaned. We joked a little about her forgetting him and joining us. She seemed flirty enough, but we never would’ve guessed what happened next. After having his car cleaned, her boyfriend just took off and left! He totally forgot his hot young girlfriend and went strolling over on his own. We have no idea when he realized his mistake, because upon seeing him ride away, she smiled and said she’ll join us. I guess this wasn’t the first time something like this happened to her. Poor little thing – we had every intention to fix her opinion of men as soon as we’ll get out of car somewhere private. We agreed to head in direction of nearby swimming area, where we could get a nice tan. Not that she needed it – het skin had an amazing color already. Already in our car she made it clear she’s up for nude tanning and we made it clear she can start stripping in our car to get a head start (if she wants). Soon after we had a nice view of her wonderful breasts and you can imagine what followed. Or don’t bother imagining and just watch this frisky young girl going wild at our members section! Stoparka114 Summer is great for Bitch Stop. Girls wear tight clothes that show off everything you need to know about a girl and even in dress they keep décolleté to show off their impressive breasts. You can just ride your car and pick your favorite girl right off the street. That is if she wants to join (you can’t really force her). As for our new catch, she definitely wanted to join us. We noticed her standing alone on a bus stop (one of our favorite picking spots) and asked her for what is she waiting. She told us she’s waiting for a bus, but already for a long time. We offered to take her where she needs to go and she agreed. Pretty standard, right? Well it won’t get much more exciting until later on, when she spreads her pretty legs and gets fucked by a horny stud, so if you’re bored reading these lines, better visit our members section and start downloading all of our awesome videos (including shows from our other sites like Czasting, CzechGFs, Lesbian Pick-ups, Gyno Violations and Amateur Sex Teens). If you however want to know how we managed to spread her silky thighs, you won’t have to read for long, because there really is not much more to say. Since it was a very hot day, she planned to visit any place that had water to swim and free space to tan. We told her we can get her there, but she kept thinking she should go home first to get some stuff. I decided to be nice and told her I can drop her off home or she can go with us directly – her choice. She decided to join us directly after some thinking. I took my car from direction I knew had a road block, so she’d have to walk and sent my friend with her ahead, knowing (hoping) what would happen. As always he didn’t disappointed and we got a very nice video out of it. And that’s all – now you have to check her out in our members section, because watching those boobs jump and down is totally awesome!