Czech roads offer a lot of excitement – you just have to know where to look, have some luck and be bold (sometimes way over the line). 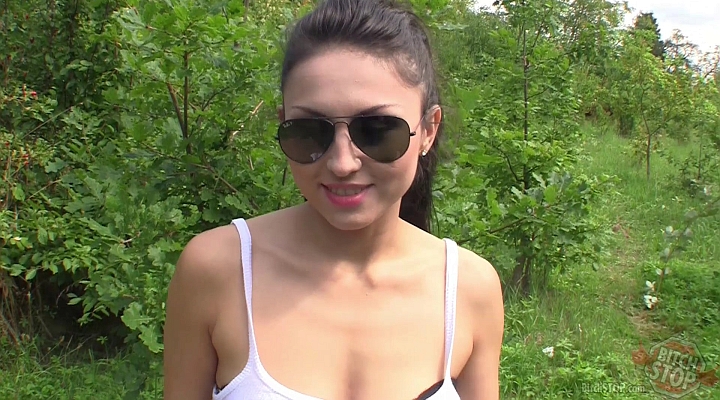 I took my friend for a ride and after a pretty long time we finally met a girl that beeped on our radar (or fuckdar if you will).

There was this smoking hot brunette with legs that could be posted on movie posters who was clearly in a need of assistance. When we stopped our car for this hot bitch, she asked if we can take her in centre of the city. We agreed, knowing it would take a while which could give us enough time to seduce her. She said she’s in a rush for a work, but knowing from past experiences that is usually no issue, if you manage to make the girl horny. And Kristina was more than worth the shot, even if we would strike out. She said she works as a store clerk in a clothes shop. Friend decided to try out the famous “research in sexual field” card and went straight for it. Obviously she said she likes sex (who wouldn’t). On a scale from one to ten, she’d give it about ten. Very important feature for the kind of women we want to shag on BitchStop. She said it didn’t matter if it was with boyfriend (whom she didn’t have at the time) as long as it was with someone she was attracted to. It was obvious we just hit the jackpot. Another thing we learned was that she loves oral (on both – giving and receiving end) and doggy style. Since she was so opened from the start it didn’t take much work to open her legs too. After all she missed proper fucking, since she had no boyfriend for a while. She seemed to really enjoy this experience and so will you. Join us and take your time watching this awesome horny girl who could rock your world if you treat her right!