BitchStop number 52 is here and with it a fresh new lustful slut, who just couldn’t keep it in her pants. 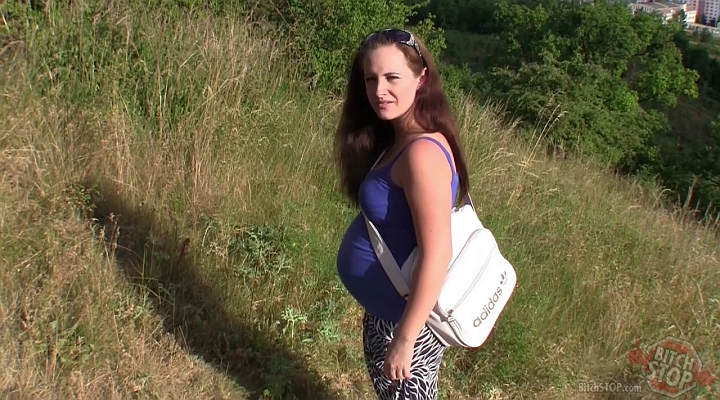 And this time, we have something special for you guys! Not even pregnant girls are resistant to our charm, as proven in this video.

But then again it could just be hormones acting up, right? Well whatever it may be, our fresh new catch of the day is a beautiful young pregnant girl who just had to enjoy a piece of rock hard meat inside her! How did we meet her? Oh you know the story, don’t you? It’s almost always the same thing – girl in trouble, knight in shining armor (well - car actually - but it’s made from metal too!) who is more than willing to help out. This time was no different, only we put ourselves into a position of “damsel in distress” and gave her a chance to help us. We met her on bus station and she said she’s waiting for a pick-up from her friend. We told her we need to find some airplane that was supposed to crash land in nearby area and convinced her to help us. She agreed, but only if we give her lift home afterwards. After short ride we pulled at some parking lot and had to take the rest of the trip on foot. My friend was talking a bit to her and learned she has no boyfriend. When he told her he can’t imagine any guy who would run away from such a beauty, she returned the compliment by telling him he’s pretty handsome too. A little thing like that can give you a hint you have a shot at her. She was leading, but we didn’t get very far. Since she was pregnant, she got tired quickly and we stopped for a rest. And that is where my friend really started to hit on her. After a while she was already sucking on his cock and her pussy was pretty wet. I guess it’s true what they say about pregnant girls – hormones make them crazy... And wild! She didn’t even mind me taking shots with my camera and I was happy I will have a new material to show off. The way she finished my lucky friend is just great. Join us and check it out yourself!