Hi guys and welcome to Bitch stop number forty three! That’s right – only a week later and we already have something new to show you. 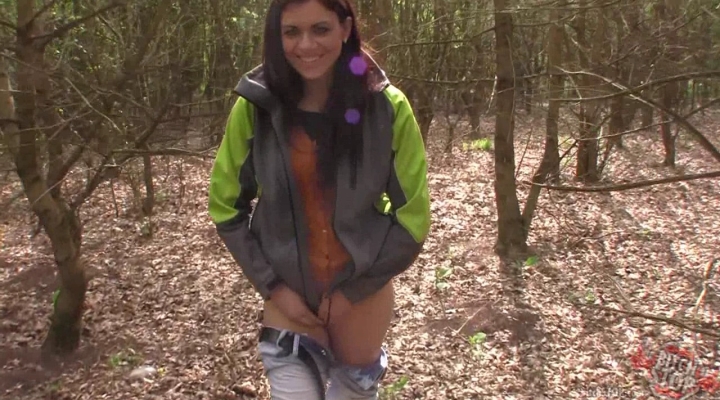 This time it’s a chick that puts the word “bitch” to shame.

I and a friend were returning from a visit and we took a wrong turn somewhere. Damn GPS and its “shortest route” settings. It lead us straight to nowhere and we had no idea where we were going. Both horny, both lonely on a lookout for something to fuck at completely abandoned place. I was horny, but friends’ state was much worse, because he recently divorced and needed some stress release. My original plan was trying to find something to fuck, throw it at him and tape it for you. So far, I had no luck, but my kind of job teaches you never to give up. I mean – you can’t force girls to spread their legs, but there is no harm in asking. After some time spent looking for a road, we met a pretty hitchhiker, which was surprising considering we were in the middle of some forest area. Since she was cute, I pulled over and invited her to hop in. She said she missed her bus and another rides in an hour, so she took a shortcut to meet her friends at nearby cottage. We rode only for a while, before getting stuck. I had to turn my car somewhere and she said she needs to pee. Once she left to do her business, we decided to secretly tape her. Friend took his cam and left to have some fun. What we expected was a few slaps in return for his bad manners, but it turned out very different. Not only she didn’t mind, she even let him touch her hairy pussy and soon after she already had her mouth filled with cock. We stopped our car to such a bitch, she actually didn’t mind being taped by one guy, while fucking the other! After we finished, all I could think of was: “Man, what a horny bitch!”