I come bearing gifts! Actually just one, but it’s worth it. 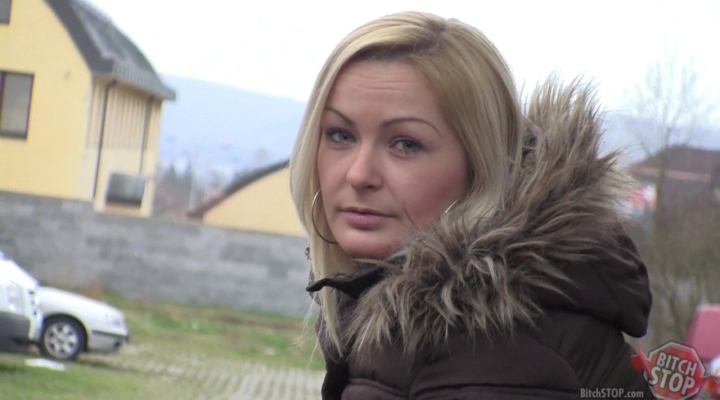 And what it may be are you asking? How about a busty blonde with fairly impressive rack willing to get what is coming her way? anyway – let’s not get ahaed of myself.

I’ll set the stage for you – single woman sitting on a bench, waiting for „god-knows-what“ and a horny sleazy guy in a car... Nah, that’s no good. How about this – damsel in distress needing help and advice from a hansdome young knight in shining armor, riding on a three hunderd horses... Yeah, that could work. But let’s cut the crap and get down to business. She was sitting alone on a banch and I decided to take a shot. It seemed like a good idea to stop my car for a hot bitch like her. Told her I’m making some BS video about cost of electricity in Czech and offered her a wonderful deal with a significant discount should she transfer to our company. She agreed to discuss this issue at her home because that way she would get a free ride. Smart girl. I started hitting on her straight away in my car. It’s always better that way. If you won’t scare them away there’s a good chance they will eventually land on your cock. Andif they run, than you won’t have to waste a lot of time for nothing and can look for another girl. This one stayed, even though she had to suspect very soon what I will ask from her. We went to her apartment and I showed her all the necesary papers. Since she wasn’t very interested I gave her my offer. I told her I’ll cut all prices by half, if she’ll have sex with me. To be honest at that moment I was so horny, I don’t think I heard her response. It should be obviuos she enjoyed herself just as much as I did even