Hi guys and welcome to a BitchStop number. 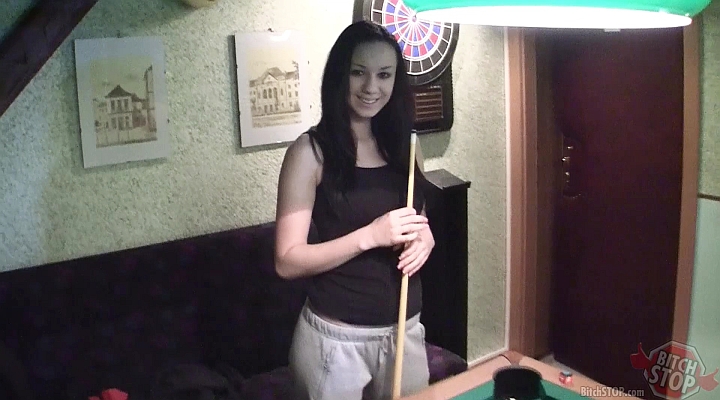 . Well it should be number eighty, but I will admit there has been a huge blunder and I actually forgot to show you this video before. This girl is actually number seventy six and she is something I really want you to see. She is also not your usual hitchhiker. I noticed her when I and my friend were just chilling out. I decided to take a few shots of surrounding streets and noticed this cute young girl standing on the street, apparently waiting for something. I challenged my friend to go and meet her. It didn’t take long and they were on their way back to our apartment. Up close she looked and sounded so young, we had to ask how old she is. I mean we all love young girls, but it’s not good to push it too far. Lucky for us, this chick was twenty (hard to believe, but why doubt her...) and very cheerful. I definitely felt like we have a good shot here. We invited her to play pool with us and she liked the idea. So we made it a strip pool and she still liked it. By then it was more than clear we will have a very interesting afternoon. And so we did – it was a while since I encountered chick that would be willing to do two guys at the same time and I liked it. So check her out, because this little wild thing will most definitely not disappoint you!