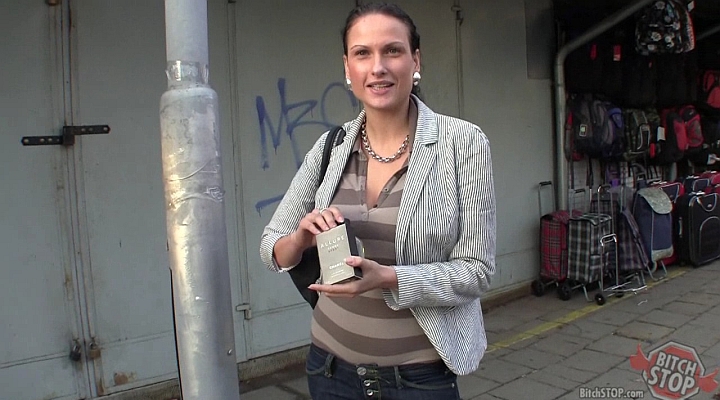 This episode of bitch stop will show you how easy you can get laid, when you meet a girl who wants to make a sale.

Just like I always do, right after starting up a car, I made my camera ready in case some pretty thing comes along. Since I had to make a stop at the shop, I rode to a nearby market. As I was looking for a stop to park my car, I saw this girl standing all alone and waiting for something. Little did I know she was waiting for me. Well not for me personally, but for any guy willing to pay for her stuff. And no, I don’t mean her juicy pussy – I meant cologne she was trying to sell. As soon as I pulled, she came rushing to my window and did her best to make me buy some stinking odor I had no interest in. What caught my attention were her pretty big boobs which I really wanted to squeeze in my hands. So I listened and already worked on a way how to strip her naked and leave her covered in my juice, longing for more. She said it was cheap, she said it was because of special Christmas discounts. She could be talking about aliens attacking the Earth and I wouldn’t care – all I could do was starring at her breasts, wondering if they are real. By then I already knew how to lure her to my car, which I may as well nickname Fuckmobile from now on (screw Batmobile - that’s for pussies). I told her I don’t have money with me an I’d have to go to my office to get them. I was pretty sure that would work on her and it sure did. Even though she was pretty scared of riding alone with me. When I got to my office I checked for money and noticed we had only big bank-notes, so I decided not to waste my time trying to seduce her and just go for it, waving my money. Yes guys, this time I paid for it. I admit – I was lazy, she seemed so fine and I really wanted to see her