Ladies and gentleman, boys and girls, we're back! It didn't take long and here we are with yet another awesome catch we managed to hunt down on bumpy Czech roads. 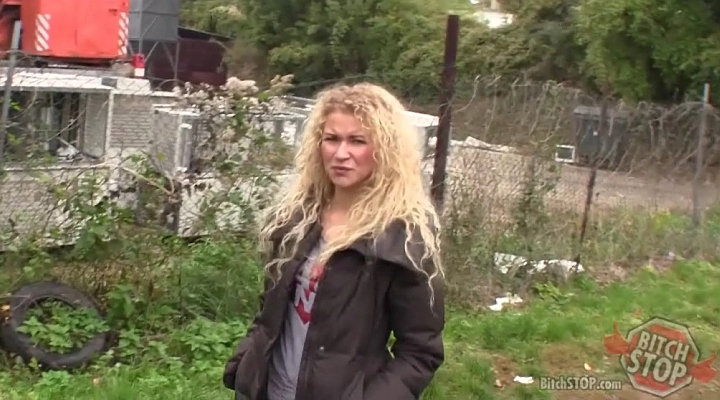 When I first met her, it was raining heavily and I felt as if I was in one of Bradbury' short stories from another world.

Just like every time I go out trying to find some horny missus who would spread her tiny legs for me, I started camera and went on the road. I thought in this rain it might be actually easy to find some desperate chick that would pay for a ride with her body. And I was right on the spot! She was standing on the side, trying to stop my car. Poor thing made her boyfriend angry; he kicked her out of his car onto a rain and left her there to suffer. I knew right then, this will be one heck of a revenge sex! She said her stuff was thrown out too and asked me to help her. I told her it’s no problem, but only if it’s alright if I tape her while making my documentary. I know I keep repeating this excuse every time, but why change something that works? She was very thankful I agreed to help her. Why not when I had an ulterior motive? This cute blonde was about to be naked very soon, riding up and down on my cock – enough reason to help this poor damsel in distress! When I saw how much stuff she had I told her we’ll need to wait for help from my friends. I made my move right away. No reason to wait in awkward silence, right? Told her some fake story about how she reminds me of my ex-GF and this cute hitchhiking bitch believed it all. Since she was thrown out, she had nothing left, no roof over her head, not even money. And she was in car with stranger who could only think about banging her. Poor thing… She tried to resist at first, but I kept trying and you can see result of my hard work on pictures around here. I’ll be honest – I don’t really know what happened to her after we helped move her stuff and I don’t really care, but I will remember that awesome fuck for a long time - every time it rains.