Punk's not dead, punk lives! That could very well be headline of our new adventure. 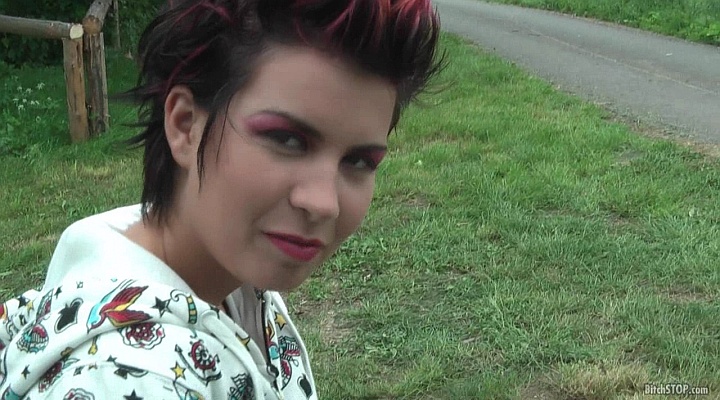 This fresh catch isn't just some hillbily chick from forgetville, but special hen from punk village.

So what - no account for the taste, right? Me and my friend decided to check nearby bikers party. Figured a lot of horny pretty girls would hang around a place like that. What we didn't expected was an empty field with a couple tents (possibly stolen from nearby circus) and no one there. Almost felt like we're in some cheasy movie called 'Day of the Living Circus Tents'. Then we noticed someone standing close to bush next to us. If you guessed it was our punker, then you're correct. Lucky for us, she wasn't one of those radical 'shaved head, huge honking standing strip in the middle' kinds, so I went to chat with her. She played shy at first, but after a while, she was ready to take a ride. Poor thing propably thought it's on my motorbike, but I had different ride on my mind. On the other hand - why not? Dropped friend and put the girl on his place. Felt like a king, when I tried to kick the engine and go for a ride. My bike, however, had a different idea. It decided to stay put and embarass me. I tried to fix it without any success. While I was stuck with my faulty engine, girl told us, her boyfriend is out on vacation. I guess when cat is out of the house... After some time wasted, I gave up and called a few of my acquaintances to come over and check it out for me. Then I left friend to watch over my bike and took our punker for a walk. You can get a pretty clear picture about what happened next from nearby photos. Even so, what pleased me most, were friends fixing my ride. So happy in fact, that we took this chick for a beer afterwards. She kept yapping about