Well friends, so what do you think? Can winter stop great guys like us in our tracks or not? The answer is – it barely slow us down! After couple of dry months, when catching a decent chick was a rare sight for us, weather itself brought us a nice change of pace. 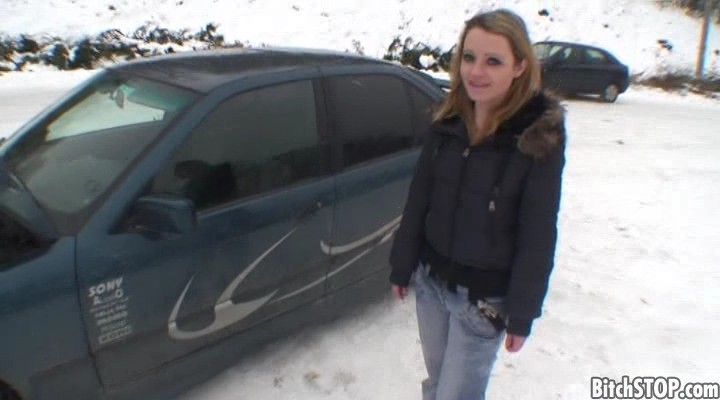 Couple of days ago, we encountered a nice little lady in despair.

Her car broke out and what a wonder – she had no idea, what to do with it. If it wasn’t for two handsome gentlemans with camera, she might even froze to death When my colleague checked her engine, he thought problem lies with a car plug. I will admit, we had some spare in out trunk, but our shack was so close by and it was warm inside. So we promised to give her some spare parts at our place and perhaps even something to warm her up. I think that poor girl realy thought we were talking about coffee. Anyway, I was pretty happy, since I already smelled a very nice catch. Unfortunately, it shows on my vid. Chick herself provoked us by saying, she wouldn’t mind some massage, which made me all the more horny. When we left car and went to our shack, I kept praying not to fall on my ass on the frozen road. Getting hurt at that moment would realy suck. Oh, I have no doubt you guys would enjoy seeing that, but then it would hardly be about bitch stop. At best, we could make vid about fucking some cute nurses, but that’s not ideal. Afterall, hitchhikers we get don’t realy know our real names :o) But enough of that, let’s get back to our story. We went to garage, where I looked for promised parts, while my colleague bailed under false pretence. He kept yapping obvious lie about having to make some calls and a coffee. Once he left, I finaly found some spare parts and you‘ll have to check my vid to see how she repayed me. I think it’s definitely worth the look.