Although unbelievable, we finaly bring you our long promised video. 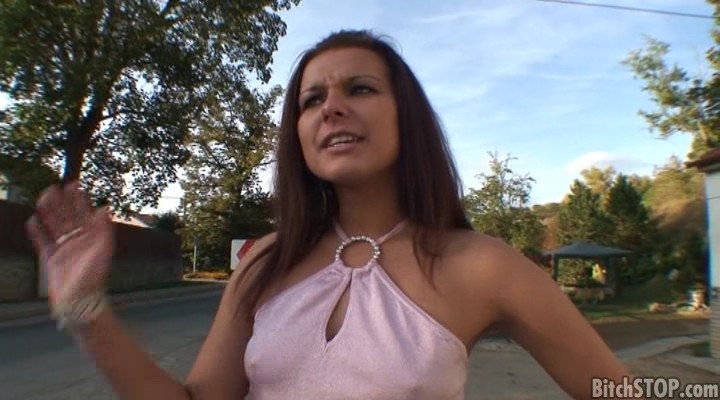 As we already said, this bad boy had to be pulled from our archive (which we like to call fuckive).

Reason why we can’t bring you any fresh catch is simple – girls don’t realy show that much during winter season and to actualy find a decent looking hitchhiker is almost impossible. And even if you find something, it’s quite difficult to determine, wheter it’s something at least a bit fuckable or if it’s some spook with whiskers under its nose, dressed in two coats, whitch carries its shopping in fishnet bags and hides its shiny bold head under a cute Mickey Mouse hat from Salvation army. That was not the case with chick you’re about to see in our vid. At that time, it was still summer, girl was scantily dressed and the only thing she could actualy surprise us, would be three boobs or a hidden cock under her pants (and you can believe me – would she had three tits, I would take her anyway – could be fun :o)). Young lady just took a trip. After a bit of smooth talking, she agreed to show us road to next village. Of course we knew whitch way to go, but we had to get her in somehow (caution – only amateurs and maniacs begs girl to join them without stating some decent reason – pros‘ like us alway come up with something ingenious ?). She introduced herself as IvÄa, but untill this day, I still remember her as miss laughing-my-ass-off-all-the-fucking-time (you’ll see – if this chick laughs like this all the time, I feel sorry for her parents and her future husbands… and her teachers and neighbours and tutors and occasional house pets). As I said already, she promised to show us a way to next village. Since in Czech its one backwater shitthole right next to another, I knew my time is short and began my smooth talking procedure. You already know, I had to be successful, or there wouldn’t be this video. We got lucky – this chick didn’t realy needed much of an effort and she stripped quite easily. If you’re ever riding through czech streets, I suggest you to keep an eye on this one, so you won’t miss a chance to take a nice ride with her just like I did.