This time I have very unusual video for you. 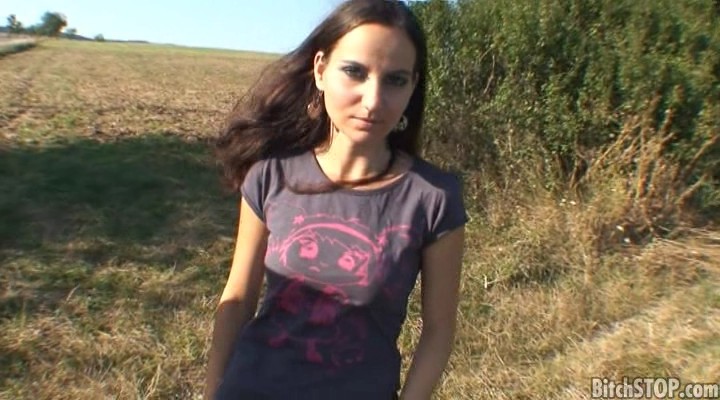 One of my friends talked me recently into letting him try and maybe even tape some scene on his own. I thought: „Why not? Life needs change and it could be fun.“ And it sure was. One day he and my colleague vent on a very short trip on Czech roads. Even though he’s just a beginner, he had pretty good luck and managed to catch some nice chick on sixth try. Believe it or not, but that realy is a great result. You don’t get to see it, but sometimes I‘ve been sent to hell by dozens of bitches before one caves. After all not many sensible girls would just enter car with two horny studs and a camera. Pretty lady he found introduced herself as Zuzka and it was obvious, something bothered her. She got into fight with her old man, he kicked her out of car and left. I’m sure everybody must realize, that hitchiker pissed on her old man and horny stud is a surefire recipie for a great fuck. As always, we made excuse to stop car and smoke a cigar. This chick was pretty smart and after a while made our guys to turn off camera and tell her their real plans (which they did… imbeciles). Luckily, she had to be totaly pissed, because instead of running away screaming, she said, if they wouldn’t want to fuck her, she‘d never forgive them For rest of the way, she already knew what is about to happen. Only thing they never told her, was about this vid being uploaded on our pages :o) I’m sure yvou can already imagine, what happened next. As I said before, this video is quite unusual. My friend was realy new to this fucking before camera and that proved to be quite a problem. To those of you, who know something about porn, I will only say, that I finaly understand need for a stunt cock. I had even concidered for a while, wheter or not should I put this vid online. Then I realized, that would only deprive you of all the fun So enjoy this, I had. Laughed my ass of at the end. Oh and one more thing. Chick he got is also a bit different from our usual choices. I wonder if you can guess, what sets her apart from the rest.