Lately we had a bad luck. 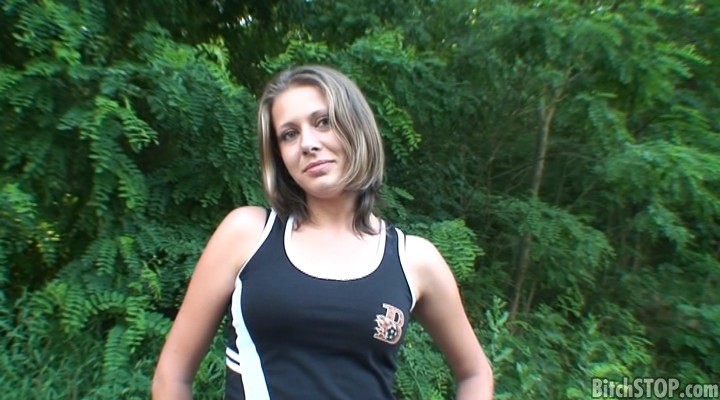 First our cam broke down and had to be sent for reclamation, where they informed us, it’s gonna take a while.

Cam was returned to us, but no sooner then after three weeks of pointless delay. Once it was back, we could finaly get back doing what we love. Dont’t get me wrong – we did enjoy occasional hitchhiker from time to time, but there was no way to tape it. To top it all, when we met one sleazy bitch called Marketa, Tomas forgot camera at home. Anyway, this concludes our bad luck strand and we can finaly brag about getting a fresh catch. Me and Martin met her during weekend on our way to a vine cellar. We drove our car through unfamiliar streets of some tiny backwater village, satisfied after a decent lunch, when we encountered this chick. Young miss Lucka, whom we gave false names of course, claimed, she’s waiting for the bus. To tell you the truth, I’m still not sure, what to think about that, because there was no sign saying, there’s a bus stop nearby. On the other hand I think everything is possible in shitty little villages like this one. It took some convincing getting her to our car. But that’s hardly surprising, concidering those two horny studs with camera waiting for her inside. Eventualy she succumbed to my natural charm. Or maybe it was because she would have to wait for next bus for up to two hours. Already inside our car, she said, she’s going to visit her grandma‘. Well isn’t that just nice? Instead of elaborating on that, I did my best to make her show us her tities. Afterall nothing is for free – not even hitchhiking, is it? Since I drove and saw nothing, we stopped the car a short distance from her grandma’s home, so I could take a good look at those two bad boys myself. Maybe even feel a little bit. Since he took her so close to her destination, I don’t have to tell you, she was pretty thankful. If you want to see how grateful she realy was, you better check out our vid.