After the short rest we did a great video. 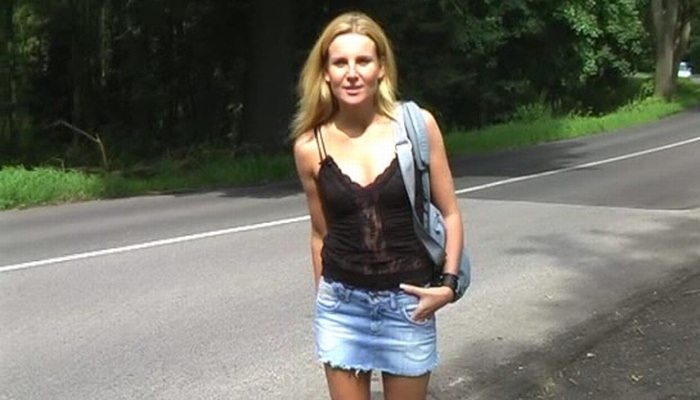 Bad luck helped us because we were run out of petrol.

Fortunately there was a petrol station. I didn’t like it but I had to carry a petrol can. Petr was very tired by driving and he wanted to have a rest. On my way to the pump I met a beautiful young girl. She was standing and hitchhiking. I use it for me and with camera I was coming near to her although I wanted to record the nature. I started to speak to the girl who was very unpleasant to me for the reason I had a camera and the second one was that I wanted to make a friend with her. After few minutes she told me that her name is Martina. After short conversation I told her my story and I offered her that in case she goes with me to the petrol station, I will give her a lift. I abused the situation and I offered her a barter trade. I was very surprised when she started to smile. I suggested it again. Martina understood that I wasn’t joking. I found out that she is 22 years old and that she is going on a short holidays to her friend. She didn’t say anything more. That’s a pity. When we were going beside the forest way. I made Martina go there. After we were at the forest she started to strip herself. She showed a autoerotic, She didn’t let me to touch her. After this experience I knew what is going to happened. I will share my great experience. In the end I gave her petrol can and money I told her that I want to record her at petrol station. While she was there I escaped as I planned. I hope that Martina didn’t stay there. Provided that she is still there I am very sorry, in case she isn’t there  I would like if she should give me back Petr’s petrol can, he wanted to kill me when I told him this story