It’s time for something exotic! Well maybe not as exotic as you might expect – it’s not like - for example - Japanese girl crossed our way or something like that. 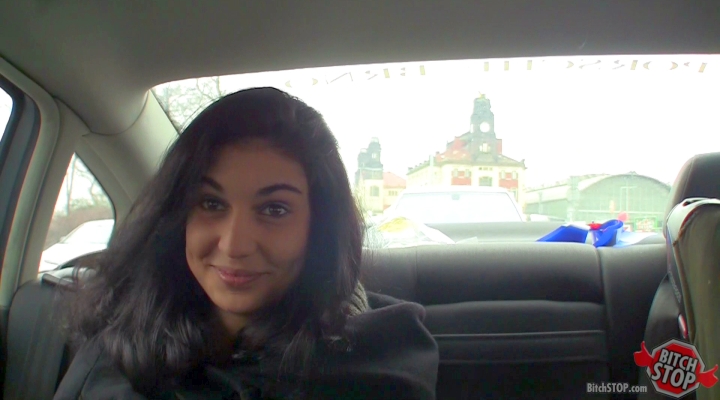 It’s just that after a long stream of vanilla white chicks we met a pretty girl with skin few tones darker and can you show her here on Bitch Stop.

This girl has an amazing body and a cute face with smile that is full of promises and lucky for us she seems intent on fulfilling them. I pulled my car over on friend’s request and we asked if she needs a ride. She said she needs to get to Wenceslas Square for a job interview. We learned she’s barely making ends meet and needs to get a job soon. Since we liked Gabina (that’s her name) and have a nice place to go near to her destination, we asked if she’s going to a casting. She laughed, but that stopped when we told her our place is close by and she could do one there for some quick cash. Although hesitant at first, she decided to give it a go. Obviously she had little idea what it entails, because she never went on one before and it would be her first time in front of camera. Since one of the other casting rooms was already filming some naughty delight, friend took this young cutie to room next door and convinced practice casting with him. She clearly liked him, because few seconds later she lifted her shirts and showed him her lovely boobs. As they say “the rest is history” and you can see on surrounding pictures it does have a happy ending. Have fun!