Damn postal services missed our package once again! Instead of usual place they sent it to a different branch office and our boss sent us to pick it up. 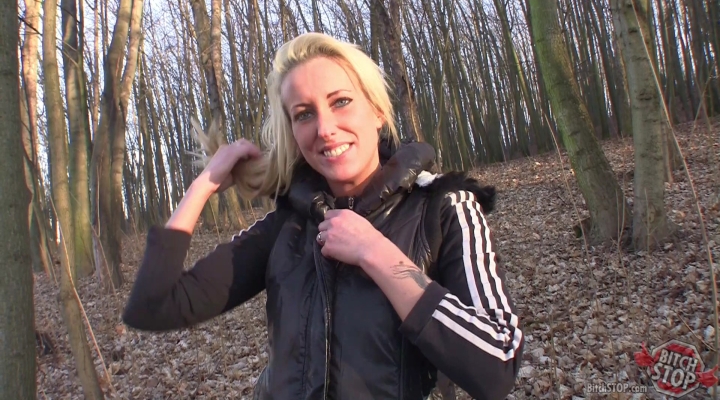 Unfortunately we forgot our GPS and since Prague is such a complicated city we had to ask for directions.

Lucky for us that’s when a totally smashing babe in running overalls stopped right next to our car to stretch before more running. Watching her perfectly shaped ass already made our trip worthwhile and we weren’t about to lose a chance of commenting at it. Friend wanted to ask directions but instead ended up asking if she owns weapons license for that ass, because she should. Lucky for us she didn’t run away, but smiled nicely and said she thinks of getting it soon. That gave us chance to ask for directions. She said she can show us, but we have to run with her. Don’t get me wrong – I would follow that ass to hell and back, but not while running, so that job fell to my friend. She gave him run for his money, but you can hardly blame the poor guy, since he was wearing normal clothes and camera. After some decent jogging they ended up in woods which she said was a shortcut (yes, Prague has woods in some areas and they indeed can be shortcuts). By that time my friend was already loosing breath – partly because of exhaustion and partly from staring at that amazing ass all the time. Turned out she was not completely indifferent to him either. Seems running produces just the right kind of hormones to make girls hornier than usual and it didn’t take long and she was on her knees giving him a pleasant blowjob. Of course that was only the beginning of a wonderful fucking with this beautiful blonde. I must say I envy him – not only he got laid, but since it was in his working time, he even got paid for it! And all I did was waiting in a car playing on my phone. Thank god he had a camera – I don’t think I could stand not seeing this beauty naked!